Faithful Transgressions In The American West

Faithful Transgressions in the American West is a resonant literary concept, with provocative implications for any reader or writer of autobiography... Bush models an impressive ability to read historical texts closely and carefully, identifying tone, rhetorical strategies, the use of imagery, and the creation of selves'skills that would benefit any historican or reader of history. —Lavina Fielding Anderson

Lucidly written and cogently argued, Bush's important and ground-breaking study helpfully contributes to rethinking the practice of both women's and western life narrative. Its central concept of "faithful transgression" investigates the inscription of gendered roles in Mormon tradition and the interventional work of women's writing within that tradition. —Julia Watson

I've read a number of manuscripts on Mormon women's writing in the past few years, and this is definitely the best one. It should be appealing to a general audience and to scholars. —Melody Graulich

The subjects of Laura L. Bush's book are six Mormon women writers and their published autobiographies: Mary Ann Hafen, Recollections of a Handcart Pioneer of 1860: A
Woman's Life on the Mormon Frontier; Annie Clark Tanner,
A Mormon Mother; Juanita Brooks, Quicksand and
Cactus: A Memoir of the Southern Mormon Frontier; Wynetta Willis Martin, Black Mormon Tells Her Story; Terry Tempest Williams, Refuge: An Unnatural History of
Family and Place; and Phyllis Barber, How I Got Cultured:
A Nevada Memoir.

The central issue Bush finds in these works is how their authors have dealt with the authority of Mormon Church leaders. As she puts it in her preface, "I use the phrase 'faithful transgression' to describe moments in the texts when each writer, explicitly or implicitly, commits herself in writing to trust her own ideas and authority over official religious authority while also conceiving of and depicting herself to be a 'faithful' member of the Church." Bush recognizes her book as her own act of faithful transgression. Writing it involved wrestling, she states, "with my own deeply ingrained religious beliefs and my equally compelling education in feminist theories that mean to liberate and empower women."

Faithful Transgressions examines a remarkable group of authors and their highly readable and entertaining books. In producing the first significant book-length study of Mormon women's autobiographical writing, Bush rides a wave of memoir publishing and academic interest in autobiography and other life narratives. As she elucidates these works in relation to the religious tradition that played a major role in shaping them, she not only positions them in relation to feminist theory and current work on women's life writings but ties them to the long literary tradition of spiritual autobiography. 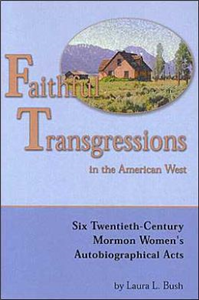