This volume, the second in the Governance, Conflict, and Civic Action series, examines civil society in South Asia through case studies of different kinds of ethnic ('communal') activism. With chapters covering Nepal, Sri Lanka, and India (Darjeeling, Rajasthan, Chhattisgarh, and Tamil Nadu), it avoids the 'methodological nationalism' so frequent in social science publications on the region. The articles examine Hindu nationalism, Dalit activism in India and Nepal, and the Janajati movement in Nepal, and show how they are animated by common ideals and themes, such as emphasis on the involvement of youth, the assertion of pride and masculinity, the desire to resist injustice and reassess previously stigmatized symbols, the importance of land and belonging, and so on.

South Asian civil society is a site of constant struggle. This volume shows how ethnic activists wrestle with official classifications and the categories of daily, traditional practices and attempt to turn these to their advantage, often bringing about radical social, political, and intellectual change as a result. It also argues that ethnic movements need to be investigated by social scientists as a part of civil society, and it shows how this can be done.

Ethnic Activism and Civil Society in South Asia will be an ideal reference for those interested in ethnicity, sociology, political science, anthropology, and South Asian studies. 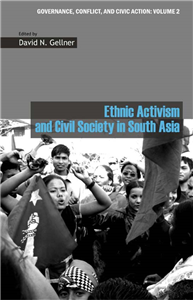