Encyclopedia of Transnational Crime and Justice

Transnational crimes involve border crossings as an integral part of the criminal activity. They also include crimes that take place in one country with consequences that significantly affect other countries. Examples include human trafficking, smuggling (arms, drugs, currency), sex slavery, non-domestic terrorism, and financial crimes. Transnational organized crime refers specifically to transnational crime carried out by organized crime syndicates. Although several encyclopedias cover aspects of transnational crime, it is this encyclopedia's emphasis on transnational justice, as well, that differentiates it from the pack. Not only does it define, describe and chart the crimes and criminal activity, it also includes significant coverage of policing those crimes and prosecuting them within domestic and international court systems. Accessible and jargon-free and available in both print and electronic formats, the one-volume Encyclopedia of Transnational Crime and Justice will contain such entries as arms smuggling, art fraud, charity fraud, hacking and computer viruses, copyright infringement, counterfeiting, drug smuggling, extradition, human trafficking, intelligence agencies, international banking laws, Internet scams, Interpol, money laundering, pollution and waste disposal, price fixing, prosecution, sanctions, sex slavery, tax evasion, terrorism, war crimes, the World Court, and more. 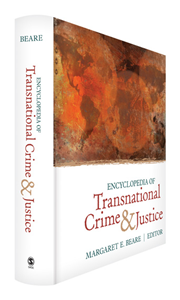