Encyclopedia of Immigration and Migration in the American West

SAGE Reference is proud to announce the Encyclopedia of Immigration and Migration in the American West.

The Encyclopedia provides a complete and definite history of racial and ethnic groups that populated the American West, those states west of the 100th meridian. The volumes cover the settling of the West and include coverage of movements of native American tribes, African Americans and the often underreported role of women in the West's development.

Key features and benefits include:

- bilbiographical entires detailing the settling of the American West;

- unique coverage of the migration of native American tribes;

- discussion of the role of African Americans in the development of the American West;

- focus on women in the migration and immigraton of the American West.

The Encyclopedia of Immigration and Migration in the American West is a unique addition to any academic or public library. 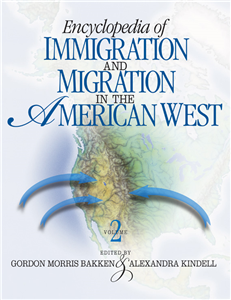