Ekirch Festschrift: Essays in Honor of a Historian of Ideas in American History is a collection of writings by former students, colleagues, and teachers. This work recognizes the scholarly achievement of Arthur A. Ekirch, Jr., who for many years taught American history at both American University and the State University of New York at Albany. A pacifist during World War II, who served in Civilian Public Service Camps, Ekirch achieved academic notoriety for his popular book The Decline of American Liberalism, which remained on the History Book Club Selection for many months. During his long and distinguished teaching career, Ekirch authored and edited ten books in the field of American history. A committed liberal and individualist, Ekirch was admired by his students for his encyclopedic knowledge and wit. The significance of this collection of scholarly articles and reminiscences is that the topics in this volume cover a wide range of information involving social ideas on civil liberties, people and ideas, comparative history and brief reflections from former students, including his Columbia University professor and Pulitzer Prize winning historian, Merle Curti. Among the contributors to this volume are prize winning historians Walter Rundell, University of Maryland, Fred Somkin, Cornell University, Paul Scheips, U.S. Army Military History Center, and Donald R. McCoy, University of Kansas. Other contributors also include the nation’s first African American archivist at the National Archives, one of the first African American females to serve as a vice president at Howard University, and one of the first female presidents of the University of Massachusetts at Boston—all former students of Ekirch. This work was a private collection given to Ekirch shortly before his retirement from teaching in 1984. In addition, there is a comprehensive curriculum vitae of his published works, awards, papers presented, and book reviews. A newly revised preface is included in this IAP edition. The editors of this volume are Kevin M. Shanley, Emeritus Professor of History at the University at Albany, and Charles F. Howlett, Associate Professor of Graduate Education at Molloy College. 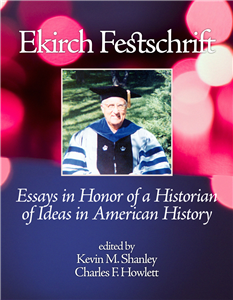