Earth Is Our Business

Changing the Rules of the Game

This book proposes new Earth law, but it is also about something more than law: it advocates a new form of leadership which places the health and well-being of people and planet first.

Polly Higgins shows how law can provide the tools and be a bridge to a new way of doing business. She argues, in fact, that Earth is the business of us all, not the exclusive preserve of the executives of the world’s top corporations.

Expanding on the proposal in her first book to make Ecocide an international crime, this book sets out the institutional framework for sustainable development and international environmental governance. It proposes new rules of the game to transform our economies, energy supplies and political landscape in a radical, but practical, way. The implications of Polly Higgins’ proposal are far-reaching and profound.

Like her award-winning first book, Earth is our Business is written for anyone who is engaging in the new and emerging discourse about the future of our planet. Instead of merely examining the problem, Earth is our Business sets out a solution: new rules of the game. They are, says Polly Higgins, a new set of laws based on the sacredness of all life.

Included as appendices are a draft Ecocide Act, a proposal for revising World Bank investment rules, and the indictment used in the mock Ecocide Trial held in the UK Supreme Court in September 2011.Eradicating Ecocide won The People’s Book Prize for non-fiction in 2011.

Another indication of Polly Higgins, the author’s, growing world recognition is her inclusion with some of the world’s foremost environmental activists and philosophers in a feature film that sheds light upon the new Universal Declaration of the Rights of Mother Earth, which has been presented by Bolivia to the United Nations for recognition. The film also features Dr. Vandana Shiva, David Holmgren, Dr. Helen Caldicott, Starhawk, Cormac Cullinan, Father Bob Maguire, John Seed and others 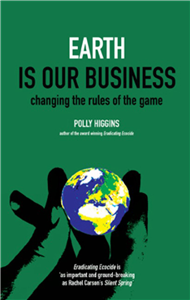 Shepheard-Walwyn (Publishers) Ltd has chosen to review this offer before it proceeds.