As a successful trial lawyer, Mike Beck uses his personality and his skill with the letter of the law to win in a courtroom. As a Marine Reservist ordered to Iraq on an unexpected deployment, he finds himself in a different world where the law of war often conflicts with common sense and his own feel for what’s right and what’s wrong. When an embedded female correspondent reveals what appears to be an illegal killing of Iraqi civilians by a U.S. Marine during the battle for Fallujah, Beck finds himself faced with a case that challenges both his legal skills and his conviction that something is very wrong with what seems to be a clear violation of the law of land warfare. Devoted to finding the truth about an ugly incident and keeping an innocent Marine from being convicted in a court-martial, Mike Beck defies orders, purloins evidence, and leads a combat team that must fight their way through a fanatical enemy force to investigate the scene of the alleged crime. Along the way as he battles his conscience, command influence, and a media giant clamoring for his head, Mike Beck finds a lot of truth about the case, about the brutal enemy in Iraq, about the nature of a very nasty war, about the Marines risking their lives in a confusing combat situation—and about himself as a Marine, a lawyer, and a man. “A timely page-turner about war, honor, love, and Iraq justice told by a true Marine—Hooah!” Eugene Sullivan, Chief Judge (ret), U.S. Court of Appeals (Armed Forces) Author of The Majority Rules and The Report to the Judiciary … fast paced, extremely interesting, and hard to put down. It is a military thriller of epic proportions, involving current trends of terrorism, personal stories, and the typical strictness of a military environment. Stone, a former Marine himself, blurs the lines between the good guys and the bad guys and shows us that in war, not everything and everyone is as they seem at first glance. His battle scenes are written from the perspective of a true soldier and are gripping and at times heart-breaking. Stone’s story is intriguing, action-packed—and hints at more to come. 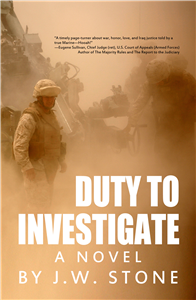 J. W. Stone is an exceptional author with 30 years of military service. He was with the Marines in Iraq during the Battle of Fallujah and developed a unique perspective on modern warfare. His writing brims with action, real characters, and a deep understanding of courage and commitment, both from the perspective of the grunts on the ground and the highest ranking officers.

Warriors Publishing Group has chosen to review this offer before it proceeds.