Dewey and Power develops out of criticism that John Dewey’s work lacks a sufficient concept of power, thus rendering his faith in an amelioristic sense of experience and a democratic ideal untenable. According to philosopher Cornel West, Dewey gives ameliorism its most mature social, political, and ethical justification. Alan Ryan suggests that Dewey represented “thinking America” at its best. Dewey’s critics maintain, however, that this best is not good enough. If their criticism of Dewey goes unchallenged, one of the most intelligent, philosophically consistent visions of ethical behavior in a world shot through with difference, risk, danger, and change becomes damned. The upshot is lost faith in the idea that the give and take of mutual reference and pooled intelligence can lead to ever wider points of contact with each other that will enrich the significance of our individual quests together. Furthermore, lost faith in ameliorism and democracy implies a lost faith in a democratic education. The purpose of Dewey and Power, therefore, is to explore the diverse critiques of his alleged insufficient concept of power and to represent Dewey’s work in a way that his critics’ claims can be evaluated. The key word here is evaluate. The book is not a simple apology for Dewey’s position on these matters.First, the book works out Dewey’s concept of power as it comes out of his understanding of the psycho-physiological makeup of the human organism. Then the analysis of power as it is psycho-physiologically interpreted is extended to incorporate Dewey's ontological insights, especially that of the directing influence of social custom on habit. This process unveils a concept of power that includes both domination and liberation. Furthermore, the relation between Dewey's sense of power and his faith in a democratic ideal is drawn out in explicit detail. Next, the book provides a full delineation of Dewey’s critics’ claims and measures the worth of these claims in light of what the preceding examination suggests in reference to Dewey’s idea of power. This analysis makes clear that Dewey understood that power can be as productively oppressive as it can be productively liberating. Finally, the book traces out why Dewey's concept of power can be deployed in the construction of a critical, democratic education. 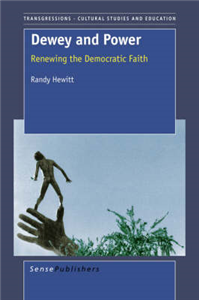