A vivid account of the prehistory and history of Denver as revealed in its archaeological record, this book invites us to imagine Denver as it once was. Around 12,000 BC, groups of leather-clad Paleoindians passed through the juncture of the South Platte River and Cherry Creek, following the herds of mammoth or buffalo they hunted.

In the Archaic period, people rested under the shade of trees along the riverbanks, with baskets full of plums as they waited for rabbits to be caught in their nearby snares. In the early Ceramic period, a group of mourners adorned with yellow pigment on their faces and beads of eagle bone followed Cherry Creek to the South Platte to attend a funeral at a neighbouring village. And in 1858, the area was populated by the crude cottonwood log shacks with dirt floors and glassless windows, the homes of Denver's first inhabitants.

For at least 10,000 years, Greater Denver has been a collection of diverse lifeways and survival strategies, a crossroads of interaction, and a locus of cultural coexistence. Setting the scene with detailed descriptions of the natural environment, summaries of prehistoric sites, and archaeologists' knowledge of Denver's early inhabitants, Nelson and her colleagues bring the region's history to life.

From prehistory to the present, this is a compelling narrative of Denver's cultural heritage that will fascinate lay readers, amateur archaeologists, professional archaeologists, and academic historians alike. 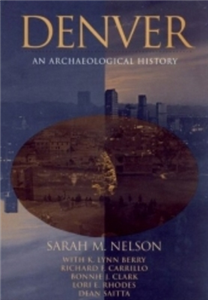