A Field Guide For Educational Leaders

'Michael Barber's pioneering work as head of my Delivery Unit helped ensure real progress, not just with our education reforms, but with healthcare and policing too. It attracted worldwide attention. This guide distils the wisdom he gained at that time and has refined since. I strongly recommend it.' - Tony Blair, Former UK Prime Minister 1997-2007

A step-by-step approach to delivering results

Michael Barber, former chief advisor on delivery to British Prime Minister Tony Blair, and his colleagues Andy Moffit and Paul Kihn thoroughly describe Barber's proven reform delivery processes in this practical field guide. The timing is ideal, as Barack Obama's administration prioritizes education reform. Citing education reform case studies from more than 20 countries, the authors assert that most previous reforms were unsuccessful due to failed implementation. This book focuses on how to accomplish meaningful results, including:

- Excellence and equity across public education

The authors illustrate a field-tested program that ensures reform is achieved in the most profound sense, with students able to see, feel, and reap the benefits of a high-quality education. It is based not only on the experience of the Blair administration but also on case studies of successful implementation of reform in the U.S. and elsewhere.

Listen as Barber describes the importance of the book: 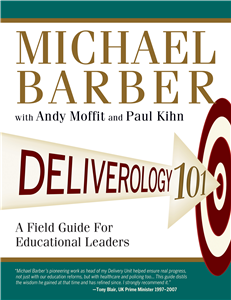