Dead Star Island, a remote tropical paradise, home to sixteen rock and movie superstars the world thinks are dead. Elvis is there, so are Jimi, Marilyn and others. They've all lived for decades in luxurious, isolated anonymity. But someone is murdering them one by one in bizarre reconstructions of the deaths they staged to leave the real world. Christian Adhis, the island's mysterious Director, is worried. Brian and John have been murdered in copycat killings, and that's bad for business. The remaining residents are living in fear, and demanding the killer is caught before he strikes again. So Christian calls in his old school friend Mario Gunzabo. Once Greece's top detective, Gunzabo is racked with guilt following the car crash which killed his wife and baby, and in which he lost an arm. Now having left Greece, and working as a part-time tennis coach, he jumps at the chance to escape his life, visit the island and investigate. Gunzabo finds that the residents have continued the drug-fuelled lifestyles they originally tried to escape, and he can't help joining in. Between parties he meets the staff: Ken Winter, charismatic former plastic surgeon to the stars, now the island's doctor; large-as-life receptionist, Mrs Bradley; her husband, Tommy, mute caretaker and main henchman for Christian; and Lastri, an alluring native woman, senior among the strangely passive villagers working on the island. Despite paying Gunzabo one million dollars to be there, Christian, a keen taxidermist, locks himself in his gloomy office, surrounded by stuffed animals, and refuses to cooperate with the investigation. As motives, alibis and clues emerge, Gunzabo gradually untangles the web of secrecy and lies surrounding the island's existence. But another resident dies, and now it's time to sober up and solve the mystery before the Deja Vu Killer strikes again. 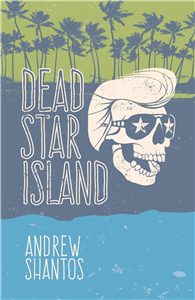 An engaging and quirky comic crime novel Potentially the first in a series featuring the one-armed detective hero Mario Gunzabo Should attract a wide audience, male and female, ages 25+ Reminiscent of Jasper Gibson and Jasper Fforde

It’s fun, and clever, and very original, and would be an enjoyable holiday read – Alicesadventuresinbookland.com, blog

Andrew Shantos always knew he wanted to write, but he didn't have an idea for a book. After scraping through his Maths degree by the skin of a Rizla, he helped his father launch Highway Electrical News, a magazine about street lighting which nearly featured as the guest publication on Have I Got News For You. In his twenties, Andrew left a number of bands due to artistic differences, helping him to really focus on his writing. Finally, three years ago, on a beach in Cyprus, Andy was thrilled to finally come up with an idea that combined his love of music, dead rock stars and ferrets, though his wife claims the idea was actually hers. They live in Brighton with their two small children and have almost settled the argument.

Alliance Publishing Press Ltd has chosen to review this offer before it proceeds.