Studies in the Relations of the Arts

Collaborative Form attempts to show the nature and limits of works of art that are made up of two or more artistic forms. The first task of this book is to analyze and interpret a set of such combinations. Each chapter treats one collaborative work and attempts to show that the principles of collaboration are the same, whether the components are poetry and graphic works as in Lettera Amorosa by Rene Char and George Braque, poetry and music as in Herzgewachse by Maurice Maeterlinck and Arnold Schoenberg, or more complex sets that include painting, music, dance, lighting, and drama as in Der gelbe Klang by Wassily Kandinsky, Morder, Hoffnung der frauen by Oskar Kokoschka, and Triad by Alwin Nikolais.

Hines breaks down disciplinary barriers and then emphasizes the effects of the interactions between the arts. The first step, in methodology, is that of refusing to make a priori commitments to the critical methodologies of the arts involved. Each art is treated from its own perspective, and each interpretation attends to interactions of the arts rather than to the contribution of any one art. Once the collaborative works are examined, the book shows that such works are similar to other art forms. They obey the laws of temporal necessity, non-addition, multiple interpretation, and unity that any poem, painting, or musical composition might be said to obey. Unlike other arts though, collaborative forms are unique examples of the combinative effects of the arts. In the process of interpreting individual works and attempting to summarize this form, we are forced to see beyond the conventions of the constituent arts. 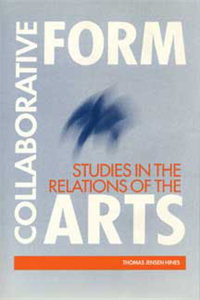