Architect Ken “Cannoli” Knoll’s world is turned upside down when the sign on his new project, the Neumann Auditorium, plunges from the building, killing Jerome Neumann, the businessman who donated $3 million to the project. Cannoli’s boss dispatches him to prove that the firm’s design was not at fault. Cannoli is appalled to find his old college classmate turned investigative reporter, Shirley Hansen, poking around. She is there at every step of the investigation, a thorn in Cannoli’s side, looking for the dirt and the killer as he seeks to solve the murder.

Neumann’s wife insists the sign’s falling was not an accident and begs Cannoli to prove that her husband was, in fact, killed by his mistress when he broke off their affair. Cannoli wonders if perhaps it was the wife who murdered him when he decided on the mistress.

Meanwhile, Cannoli is delighted when a Hollywood actress appears at the site of the sign plunge, intrigued by the death. Ken begins seeing her romantically, despite his intern Edison’s warnings about his sudden good fortune.

There are plenty of suspects, as Cannoli discovers Neumann’s former business partner held a grudge against him for a deal that went bad and ruined his life. He wonders about Michigan poet Molly Gross, who, despite her position on the city’s planning board, was an outspoken critic of the project. And there’s the activist group who had protested, sometimes violently, the destruction of the library’s old Fitzgerald Reading Room to build the auditorium. As Cannoli digs deeper, his prime suspect is murdered and suddenly he finds his own life in danger. 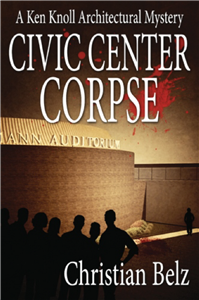 Christian Belz has been a practicing architect in Metro Detroit for 29 years, with experience in retail, educational, and industrial projects. He is Vice President of Detroit Working Writers. He won the Grand Prize in Aquarius Press’s 2011 Bright Harvest Prize for his short story Chambers. Christian’s fiction has appeared in Writers’ Journal, The Story Teller Magazine, and Wicked East Press’s anthology: Short Sips, Coffee House Flash Fiction Collection 2. His poetry has been published in WestWard Quarterly and Yes, Poetry.

Christian is one of the co-authors of The 28-Day Thought Diet.

Civic Center Corpse is the second of the Ken Knoll Architectural Mysteries. Find out more at KenKnollMystery.com

Cozy Cat Press has chosen to review this offer before it proceeds.