This book presents a study of the career of Charles R. Crane, a central player in President Woodrow Wilson’s entourage. In the wake of the U.S. intervention in the Great War, Crane participated in important diplomatic and fact-finding missions. Leclair follows Crane through revolutionary Russia and on the Western front, in the emerging countries born out of the Ottoman Empire, and then in postwar China. In the process, Leclair’s book offers original insights into some of the major domestic and international decisions that define Wilson’s presidency and its legacy in the history of the United States and of international relations, most notably Wilson’s motivation and effort to bring about a new world order under American political and moral leadership. Leclair convincingly portrays Crane as a proponent of the principle of self-determination –one, indeed, whose aversion to colonialism predated Wilson’s international vision as formulated in his Fourteen Points. While a convergence of reform interest and humanitarian concerns brought Crane and Wilson together on some of the most complex issues of the time, Crane’s vision –propelled by a genuine philanthropic commitment—adds substance to what has largely been derided as empty Wilsonian idealism. The thematic structure of this book, the quality of its narration, and the wealth of information it contains, are added elements that make it an excellent contribution to the field of U.S. history. It could be used as a an assigned reading in college or university courses, especially in advanced American history, American Political thought and international relations courses. 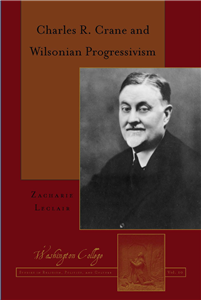