This book on higher education institutional history is unlike any other. It is not a history of a particular school or a group of schools of the same type; instead it describes the emergence of a varied collection of higher education institutions in the same area in a specific time frame. The setting is New York’s Capital District, the cities of Albany, Troy, and Schenectady, primarily during the period from 1790 to the 1850s. Albany was settled by the Dutch in the early 1600s, and Troy and Schenectady were its frontier outposts later in that century. All three flourished because wealth from river-based trade supported new enterprises and attracted new settlers. By 1810, Albany was one of the nation’s largest cities, and like prosperous cities anywhere, needed knowledgeable leaders and places to educate their children. Consequently, Union College was founded in Schenectady in 1795 and Albany’s Academy and Female Academy in 1813 and 1814. Emma Willard’s Female Seminary relocated to Troy in 1821, and nearby Rensselaer Polytechnic Institute opened in 1824. Growing communities also need higher quality professional services. The Capital District’s response here was Albany’s Medical College which opened in 1839, its Law School in 1851, and in 1844, the State Normal School to provide teachers for newly established common schools. This book tells the story of these schools, why they were founded, who made it happen, how they compared to similar institutions elsewhere, and their influence beyond the Capital District. 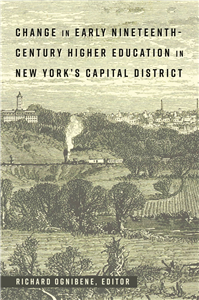