Champions of the Rule of Law

An account of the Lawyers who helped — over centuries — to develop and protect civil liberties, human rights and the Rule of Law. Also discusses breaches of the Rule of Law in modern cases and in response to terrorism. Champions of the Rule of Law looks at an overarching principle of English Law. It describes how a powerful and fundamental rule came about and how it has been preserved in the face of attempts to circumvent it. Standing at the heart of all matters of justice — and now exported to many parts of the world — the Rule of Law holds, in short, that the Law applies in equal measure to everyone. No matter how high, mighty or privileged someone may be, or whatever claim or allegation is being made, all those coming before it should always be treated in just the same way as anyone else will be. Events in both modern times and across legal History readily demonstrate the sometimes precarious nature of the rule and the need for ‘champions’ who are prepared to uphold and defend it—and whilst the need for such a rule may seem obvious on any balanced view of how justice should be dispensed, the central importance of the rule is by no means intuitive to some people. This means that there is always a need to re-iterate the purpose of the rule, the arguments behind it and to understand the mechanisms which safeguard and protect it. Whenever the Rule of Law does fall under threat, whether due to arrogance, claims to special treatment, misguided understandings, dubious explanations or lack of due process, there is a need for people of the calibre of those described in this book to step forward. Quite apart from the book’s interest for Lawyers, historians and students it will appeal to anyone seeking reassurance that justice is truly blind, fair, even-handed and accessible to all. With a Foreword by Lord Steyn. 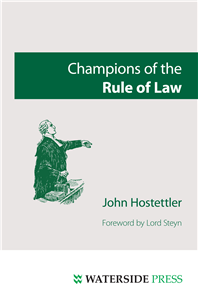