Following the success of its best-selling predecessors, the Fourth Edition of Harriette Pipes McAdoo'sáBlack Families retains several now classic contributions while including updated versions of earlieráchapters and manyáentirely new chapters.á The goal through each revision of this core text has been to compile a book that focuses on positive dimensions of African American families.ááá The book remains the most complete assessment of black families available in both depth and breadth of coverage.á Cross-disciplinary in nature, the book boasts contributions from such fields as family studies, anthropology, education, psychology, social work, and public policy. Directions for future research are suggested at the end of each chapter, and references guide readers to more in-depth discussion of specific topics. Chapters areágrouped into six parts covering history, theoretical conceptions, religion, child socialization, gender relations, and public policy.ááá New to This Edition:á A new chapter 2 by the creator of the annual celebration of Kwanza, Maulana Karenga and Tiamoyo Karenga A new chapter 16 by noted historian of Black women, Darlene Clark-Hines Two new chapters on religious dimensions by Harriette Pipes McAdoo (chapter 7) and by Pamela Martin (chapter 9) A new chapter 10 covering the topic of death is discussed by Latrese Adkins, with emphasis on the role that funerals play with Black communities A new chapter 17 on breast cancer prevention for women by Karen Williams adds to the coverage of gender relations The latest demographic information on Black familiesáin a new chapter 11 written by Harriette Pipes McAdooá Jonathan Livingston updates John McAdooÆs work on the socialization of men within families in a revised chapter 15 Robert Hill updates his earlier chapter on social welfare policies in a revised chapter 23 that examines the aftermath and impact of welfare reform enacted during the Clinton administrationááBlack Families, Fourth Edition will interest students, scholars, and practitioners in African American Families, Black Families, and related courses in fields of African American and ethnic studies, human development and family studies, sociology, social work, and education. 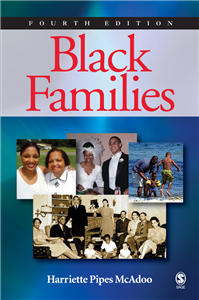