In this unconventional memoir, Kevin Holdsworth vividly portrays life in remote, unpredictable country and ruminates on the guts -- or foolishness -- it takes to put down roots and raise a family in a merciless environment.

Growing up in Utah, Holdsworth couldn't wait to move away. Once ensconced on the East Coast, however, he found himself writing westerns and dreaming of the mountains he'd skied and climbed. Fed up with city life, he moved to a small Wyoming town.

In "Big Wonderful", he writes of a mountaineering companion's death, the difficult birth of his son, and his father's terminal illness -- encounters with mortality that sharpened his ideas about risk, care, and commitment.

He puts a new spin on mountaineering literature, telling wild tales from his reunion with the mountains but also relating the surprising willpower it took to turn back from risks he would have taken before he became a father. He found he needed courage to protect and engage deeply with his family, his community, and the wild places he loves. Holdsworth's essays and poems are rich with anecdotes, characters, and vivid images.

Readers will feel as if they themselves watched a bear destroy an entire expedition's food, walked with his great-great-grandmother along the icy Mormon Trail, and tried to plant a garden in Wyoming's infamous wind. Readers who love the outdoors will enjoy this funny and touching take on settling down and adventuring in the West's most isolated country. 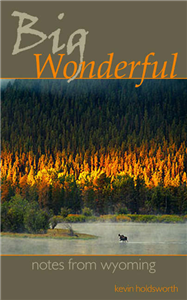