A Journey Through Eastern Turkey

Beyond Ararat is a journey to the cradle of civilization, where the Tigris and the Euphrates rise.

An enthusiastic, perceptive and sympathetic traveller

The journey begins along the strange and beautiful Black Sea coast of Turkey, the poath of Xenoophon and the Ten Thousand, of Jason and the Golden Fleece. From the Russian border her route swings south over vast plains and rugged mountains to the ghost town of Ani and to Ararat, the legendary resting place of Noah’s ark. It was a hard journey through some of the most magnificent scenery in the world - and some of the least predictable people, where a lone female cyclist never knew whether to expect kindness and hospitality, or stones and bullets and attacks from savage dogs.

Travelling alone and by bicycle offers unique relationships with both land and people. Bettina Selby interweaves her account with insights into the problems of an area re-establishing its position as the bridge between East and West. She brings alive the rich historical background so vital for understanding this troubled part of the world.

An enthusiastic, perceptive and sympathetic traveller 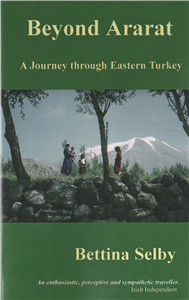