My Part in the Paddington Bear Story

"A heart-warming, inspirational tale of a woman trying to run a business while having me as a son."- Jeremy Clarkson"Originally made one Christmas as a present for Shirley's and her husband Eddie's children Jeremy and Joanna, the bear remains a classic of its kind - one which still gives me pleasure whenever I see it - and it served as a kind of yardstick when judging other products. Some things, like Concorde and the Jaguar XK120, look right from the word go. It was created with love and it was born with that indefinable something known as star quality. You either have it or you don't."- Michael Bond, author of the Paddington Bear stories'Bearly Believable' is the hilarious story of how Shirley Clarkson grew her company, Gabrielle Designs, from a tiny spare-room business selling tea cosies in Doncaster into an international business shipping Paddington Bears all over the world ... and then watched it collapse.With no business experience, no capital, just ?ú100 of backing, and a copy of Michael Bond's book for inspiration, Shirley came up with the original - now classic - Paddington. Manufacturing from a collection of ramshackle farm buildings, she was hit by a wave of orders from retailers, as the world went Paddington-crazy. From Tokyo to Sydney to San Francisco, everybody wanted him.As sales skyrocketed, Shirley and her husband Eddie experienced the giddy feeling of success, then the stresses of growth. Turnover leapt to a million a year, Gabrielle Designs was hailed as a British success story, and Shirley was invited to meet the Queen on her visit to Doncaster Mansion House. Meanwhile, storm clouds gathered. The workforce went on strike, 50,000 bears had to be recalled because of faulty eyes, Eddie was ill in bed for a year, and the pipes at the factory burst. Shirley employed a professional manager to rescue the situation - who turned out to be illiterate, dishonest, and incompetent. The '70s moved on, the craze faded, and the tide went out on Paddington as fast as it had come in.Shirley tells her rollercoaster story with warmth, modesty and a blunt Yorkshire wit. For fans of Paddington, her book provides a delightful insight into how a simple bear became a worldwide icon; for students of business, it provides lessons in how to create a business and, more particularly, how not to run one; for those who appreciate tales of triumph and adversity, it is packed with more ups and downs than Paddington's paw in a jar of marmalade. 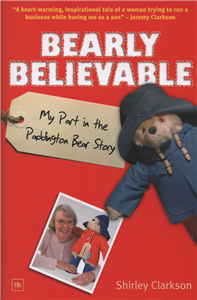