A Northern Community at War

The personal story of the men and women of Cortland, New York and their efforts to support the war effort

Most regimental histories focus narrowly on military affairs and the battlefield exploits to the exclusion of the broader social and political context, while community studies examine civilian life divorced of the military situation. Banners South documents the influences and events that define the Civil War from the perspective of Northern soldiers and civilians, moving beyond the boundaries of the battlefield by exploring the civilian community, Cortland, New York, which contributed many men to the 23d New York Volunteers.

Author Ed Raus uses original source material to examine the Northern soldier—his attitude toward Southerners, blacks, and officers and reasons why he fought —and provides detailed portrayals of major battles (Second Bull Run, Antietam, and Fredericksburg). He also explores the New Yorkers’ experiences with Southern civilians, including women and slaves, when the troops served as an occupying force in Fredericksburg, Virginia. The 23d New York served during the first two years of the Civil War, and the men from Cortland found their tour hard to forget. As Raus’s study reveals, many of the unit’s survivors had a difficult time resuming their peaceful, prewar lives.

Raus narrates these men’s stories of war and homefront with care
and thoughtful analysis. Banners South promises to alter the traditional
genre of regimental histories and will be of interest to Civil War scholars and buffs alike.

This is the first book in the Civil War in the North Series which will highlight innovative scholarship that broadens our understanding of what the American Civil War meant to Northern society. This new series will encompass overlooked and under-researched topics, from the battlefield to the homefront, from the antebellum era through Reconstruction. 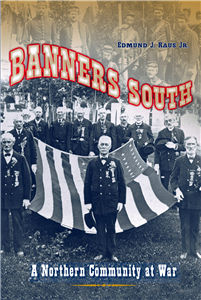