All those who delight in modern Aspen as a ski resort and cultural center, as well as those who enjoy reading about all the old Wild West, will be charmed by this book.

In its heyday as a mining town, Aspen rivaled the camps of the California Gold Rush, Virginia City in Nevada's Comstock Lode, and Leadville in Colorado, and from 1887 to 1893 it was the riches silver-mining center in America. Aspen's story begins in 1879 with seven prospectors camped in tents by the intersection of the Roaring Fork River and Castle Creek at the foot of Aspen and Smuggler Mountains.

The first great spurt of growth came in 1883, when Jerome B. Wheeler, a partner in Macy's Department Store, bought several claims and built roads and a smelter. The arrival of the Denver and Rio Grande Railroad in 1887 transformed Aspen into a major metropolis by the standards of the day, with some 12,000 inhabitants and services that included six newspapers, two banks, an opera house, electric lights and telephones, a street car system, a waterworks, and schools and churches.

The city became home to colorful personalities like B. Clark Wheeler, grandiose promoter and editor of the Aspen Times, and Davis H. Waite, his father-in-law and a local reformer who was elected governor of Colorado in 1892. Rohrbough brings to life the dynamic entrepreneurs such as David M. Hyman and Henry B. Gillespie who made the town and profited from it, the vicious court fights that resulted from mining disputes, and most effectively of all, the atmosphere of a booming mining community.

In July 1893 the price of silver dropped sharply and within a week, all the mines in Aspen closed. By 1930, Aspen was virtually a ghost town, with a population of 705. But then a new generation of entrepreneurs discovered another natural resource in this former mining camp. It was snow. 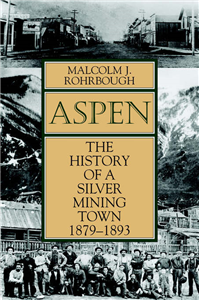