American Realist Fictions of Marriage: From Kate Chopin, Edith Wharton to Frances Harper, Pauline Hopkins intervenes in the field of American literary realism by arguing that selected marriage fiction of Kate Chopin, Frances Harper, Pauline Hopkins, Williams Dean Howells, Emma Dunham-Kelly, and Edith Wharton interrogates the possibility of harmonious societies based on racial, gender, and social equality. Megda (1891), An Imperative Duty (1891), Iola Leroy (1892), The Awakening (1899), Contending Forces (1900), and The House of Mirth (1905) express suspicion about marriage and its potential consequences. These six novels use marriage as a forum to explore the problem of the “color line,” sexism, and class difference that promoted social boundaries. These novels demonstrate how choices about marriage made by female protagonists are metaphorical representations of social equality while simultaneously revealing threats to that ideal vision. In a wider context, American Realist Fictions of Marriage aims to widen the conventional narrow focus on canonical realist writers by highlighting intellectual exchanges that were taking place between traditional and non-traditional writers about marriage. 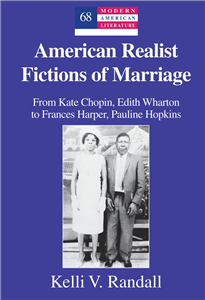