Powerful cross-currents of both decline and resurgence have been affecting American political parties over the past several decades. Is the era of decline that began in the late 1960s over and are the parties in a new era of rebuilding? In what direction are the parties headed and what does it mean for a healthy and well-functioning democracy? American Political Parties brings together a distinguished team of contributors to explore these questions. Students are exposed to original, &BAD:quot;state-of-the-art&BAD:quot; research on the parties that is written to be accessible and engaging.Presenting both historical and contemporary material on the changing U.S. parties, the book offers a balanced portrait and a wide variety of views concerning the continuing weaknesses of the parties and their concurrent signs of revitalization. Essays examine three important elements of parties&BAD:mdash;the parties in the mass public, the parties as electoral and political organizations, and the parties as governing groups. Two themes recur throughout&BAD:mdash;the first deals with party change (specifically realignment and dealignment) and the second with party responsibility in a democratic government. The concluding chapter places the contibutors' various findings and viewpoints in perspective. It offers several theories to help explain why the parties seem to be following their dual paths of development and considers the implications of this state of affairs for the future of American democracy. 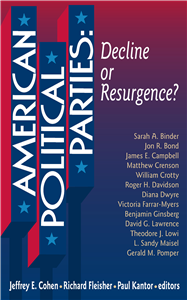