This handy single volume features a wealth of fascinating biographical information on approximately 9,000 of the most important U.S. elected and appointed leaders. Newly updated, it includes key facts on political leaders spanning 220 years of American history. Organized for quick, easy reference, the book contains six chapters in which readers will find the following on presidents, vice presidents, cabinet members, Supreme Court justices, members of Congress, and governors:?Basic Facts including all significant biographical data, such as birth and death dates, periods of public service, and party affiliationsSpecial Information including boxed features and analytical commentary on topics such as presidential disability and succession; religious affiliations of the U.S. presidents and Supreme Court justices; White House hostesses; and women, African Americans, and Hispanic Americans in Congress, the Cabinet, the Supreme Court, and the White House?This easy-to-use resource also offers an appendix of additional reference tables on Congress, including sessions held, leadership, and committee chairmen.?American Political Leaders 1789-2010 is the perfect reference guide for researchers, students, and interested citizens looking for names, dates, and other essential information on U.S. leaders in one convenient, reliable source. 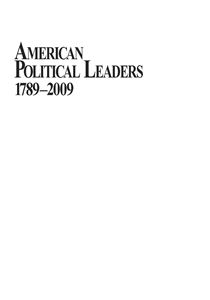