Marilyn Gittell was a renowned scholar and social activist. A graduate of Brooklyn College (BA) and New York University (PhD), she held her first faculty appointment at Queens College (1960-1973) before serving as Associate Provost (1973-1978) at Brooklyn College. She then joined the faculty of the City University of New York's Graduate Center (1978-2010) as Professor of Political Science. She helped launch and was the founding editor of Urban Affairs Quarterly, the leading academic journal in the field of urban research.

Activist Scholar highlights Professor Gittell's writings on community organizations, citizen participation, urban politics, the politics of education, and gender. She specialized in applied and comparative research on local, regional, national, and international policies and politics, and placed a high priority on training researchers and scholars. Marilyn Gittell was a mentor to hundreds of students in the City University of New York system, and her legacy of activism continues as her students, now on the faculties of universities across the nation, engage in important work globally. 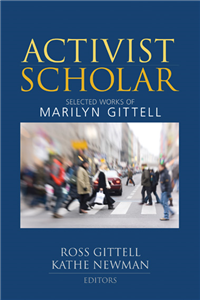