Across Great Divides is a timeless story of the upheavals of war, the power of family, and the resiliency of human spirit. When Hitler came to power in 1933, one Jewish family refused to be destroyed and defied the Nazis only to come up against another struggle—confronting apartheid in South Africa.

The novel chronicles the story of Eva and Inge, two identical twin sisters growing up in Nazi Germany. As Jews, life becomes increasingly difficult for them and their family under the Nazi regime. After witnessing the horrors of Kristallnacht, they realize they must leave their beloved homeland if they hope to survive.

They travel to Antwerp, Belgium, and then on to Rio de Janeiro, Brazil, chasing the diamond trade in hopes of finding work for their father, a diamond merchant. Finally, they find a home in beautiful South Africa and begin to settle down.

But just as things begin to feel safe, their new home becomes caught up in it’s own battles of bigotry and hate under the National Party’s demand for an apartheid South Africa. Eva and Inge wonder if they will ever be allowed to live in peace, though they cling to the hope for a better day when there will be “an understanding of the past, compassion for all humanity, and …hope and courage to move forward across great divides.”

Worldwide rights are available for this novel. I would like to sell Across Great Divides in Europe, Africa and Asia.

The readership for Across Great Divides are history buffs, both female and male, and all ages, from late teens through adult. 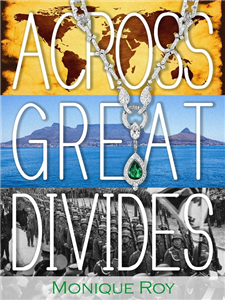 I have built a solid platform that includes a website and social media with growing followers. I do lots of promotional marketing through subscription based sites.

"The historical detail and references in the novel were seamlessly infused with the fictional elements which created a very well-rounded story."

"A book you wont want to put down. This could make a great WWII movie or mini TV series. No doubt in my mind a very easy rating of 5 stars for this book."

Monique was born in Cape Town, South Africa, and her grandparents were European Jews who fled their home as Hitler rose to power. It’s their story that inspired her to write Across Great Divides, her debut historical novel. She is also the author of middle-grade fiction Once Upon a Time in Venice.

To learn more about Monique, visit the Author Profile page.