Tim Mack, the Pole Vault, and the Quest for Olympic Gold

“Above and Beyond is a treat. Livingston’s knowledge and love of the sport shines through.”—David Maraniss, author of Rome 1960: The Olympics That Changed the World

Two Olympic medalists were recognized at Quicken Loans Arena in Cleveland, Ohio, days before Christmas 2004. One was the Cleveland Cavaliers’ LeBron James, the “Chosen One” of the NBA. He had a bronze medal from the Athens games that summer. The other was a Cleveland homeboy too, a gold medalist who had flown higher than anyone before on the Olympic stage. Hardly anyone knew his name. He was Tim Mack.

His high school coach did not see anything particularly promising in the young pole–vaulter. Mack never made it to the state meet, and he was the first to admit he had a fear of heights. But thanks to his unflinching determination and confidence, Mack went on to prove that he was anything but mediocre. In 2004 the young athlete won the Olympic gold medal for pole vaulting. His jump of 19 feet 6–1/4 inches was not only Mack’s personal best but the highest in Olympic history.

Award-winning sports columnist Bill Livingston follows Mack as he practices one of the world’s most dangerous and demanding sports. Livingston reveals the fascinating subculture of pole vaulting—from Bob Richards, the only man to win Olympic gold twice in pole vaulting; to Sergey Bubka, the most controversial pole vaulter ever; to Don Bragg, a rowdy Tarzan-like character who swung on ropes in his backyard to build upper-body strength; to the stirring duel between Mack and Toby Stevenson as they battled for gold in Athens.

Readers will discover how Mack struggled and endured, while working in a factory, as a mascot in a bumblebee costume, and as a janitor, and how Mack changed his training and revamped his body and mind in a three-year program that made his AOL username, Goldnathens, a self-fulfilling prophecy. 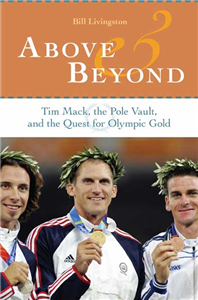