A Coat of Many Colors

For more than a century and a half - from the middle of the 19th century to the end of the 20th - the garment industry was the largest manufacturing industry in New York City, and New York made more clothes than anywhere else. For generations, the industry employed more New Yorkers than any other and was central to the city's history, culture, and identity. Today, although no longer the big heart of industrial New York, the needle trades are still an important part of the city's economy - especially for the new waves of immigrants who cut, sew, and assemble clothing in shops around the five boroughs. In this valuable book, historians, sociologists, and economists explore the rise and fall of the garment industry and its impact on New York and its people, as part of a global process of economic change. Essays trace the rise of the industry, from the creation of a Manhattan garment district employing immigrants from nearby tenements to the contemporary spread of Chinese-owned shops in cheaper neighborhoods.;The tumultuous history of workers and their bosses is the focus of chapters on contractors and labor militants and on the experiences of Italian, Chinese, Jewish, Dominican, and other ethnic workers. The final chapter looks at fair labor, social responsibility, and the political economy of the offshore garment industry. 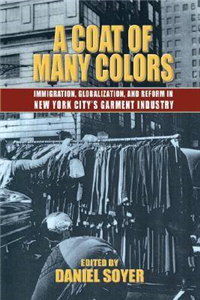