The Indian media is witnessing an explosive situation with newspaper and magazine circulations increasing in great numbers and television news channels—in both English and regional languages—going up by the day. Internet news portals, too, are recording a good number of hits.

Journalism, then, holds tremendous promise for both seasoned and budding journalists. However, behind every promise, there lurk dangers and temptations, which must be scrupulously avoided if the basic values of the profession are to be safeguarded. Otherwise, the relentless spotlight of criticism will turn on journalism and its practitioners.

21st Century Journalism in India is a path-breaking book that looks at the practices and theories of journalism in the 21st century. This collection of writings by practising journalists is perhaps unique in that they have turned the spotlight on their own profession.

The volume is thematically divided into four sections:

- REPRESENTING THE UNREPRESENTED deals with media representation (or lack of it) of largely ignored sections of society, such as homosexuals, Dalits and other minorities or weaker groups.
- THE PLURALITY OF PRACTICE studies the coverage of vital areas such as economics, legal issues, science, arts and culture, and humour.
- MEDIA IN PERSPECTIVE looks at different kinds of journalistic practices, including photojournalism
- FUTURE TRENDS discusses newer forms of journalism, like blogging and citizen journalism. 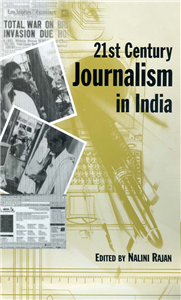