Reuters - Estimates say that nearly three thousand people nationwide, and fifteen thousand people worldwide have died of the H1N1 virus or Swine flu and nearly eighty thousand cases have been confirmed in hospitals and clinics across the United States and the world, the World Heath Organization reported. The influenza pandemic of 2010, while not nearly as prolific as the one that raged in 1918 still has citizens around the world in a near state of panic.

There would be no more headlines.

It started in a lab at the CDC (Center for Disease Control), virologists were so relieved to finally have an effective vaccination against the virulent swine flu. Pressure to come up with something had come from the highest office in the land. In an attempt at speed the virologists had made two mistakes, first they used a live virus and second they didn't properly test for side effects. Within days hundreds of thousands of vaccinations shipped across the US and the world. People lined up for the shots, like they were waiting in line for concert tickets. Fights broke out in drugstores as fearful throngs tried their best to get one of the limited shots. Within days the CDC knew something was wrong. Between 4 and 7 hours of receiving the shot roughly 95% succumbed to the active H1N1 virus in the vaccination. More unfortunate than the death of the infected was the added side effect of reanimation, it would be a decade before scientists were able to ascertain how that happened. The panic that followed couldn't be measured. Loved ones did what loved ones always do, they tried to comfort, their kids or their spouses or their siblings, but what came back was not human not even remotely. Those people that survived their first encounter with these monstrosities usually did not come through unscathed, if bitten they had fewer than 6 hours of humanity left, the clock was ticking. During the first few hysteria ridden days of The Coming as it has become known, many thought the virus was airborne, luckily that was not the case or nobody would have survived. It was a dark time in human history. One from which we may never be able to pull ourselves out of the ashes from. 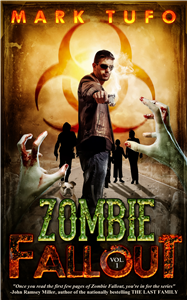 Large social network following along with an extensive email campaign

The word lighthearted doesn’t usually come to mind when we think of the zombie apocalypse, but Sean Runnette does a skillful job balancing humor with horror in this audio edition, which makes for an entertaining stroll with the walking dead. When a new vaccine against the latest incarnation of the H1N1 turns the majority of the population into flesh-eating monsters, blue collar Colorado family man and survivalist Michael Talbot—along with his family and an eclectic group of neighbors from the small gated community of Little Turtle—is forced to fight for his life against an ever-growing hoard of the living dead. Runnette gives Talbot a dry, I-knew-this-was-going-to-happen-to-me-someday attitude that captures the wry spirit of Tufo’s prose. This provides a welcome departure from the doom and gloom of most zombie tales, and Runnette wrings plenty of chuckles from the material. Still, the narrator doesn’t forget that this is an apocalyptic horror story, making sure there are plenty of chills and thrills along the way. A CreateSpace paperback

"Working as both straight up survival fiction and comedy, Mark Tufo's FALLOUT is a gory, laugh out loud tale of a community of heroes, cowards and misfits struggling against zombies. Tufo's unlikely hero is one of the funniest and most endearing characters I've seen in zombie fiction." - Craig DiLouie, author of TOOTH AND NAIL and THE INFECTION

"Mark Tufo has written the first zombie series that kept me up reading all night." ---John Ramsey Miller, author of The Last Family