YOU'VE GOT SOMETHING COMING

Starke’s knockout punch of a debut follows the adventures of an aging down-on-his-luck boxer and his deaf, motherless daughter. While suffering the aftereffects of his latest bout, Trucks breaks Claudia out of a children’s home in Wisconsin and heads west with her in search of a better life for both of them, vowing to his daughter that he’ll stay out of the ring. Father and daughter hitch their way across Minnesota, South Dakota, and Montana, encountering helpful people along the way, among them June, a kindly woman whose husband has just left her because she is barren, and Gerald, a widowed Montana farmer who gives them a temporary home. But as Trucks tries to bond with his daughter and make the best life for her he can, fate and his inner demons conspire against them, and, in the end, a desperate, short-sighted Trucks returns to the ring for a low-paying match, risking his health for one last attempt to support Claudia. 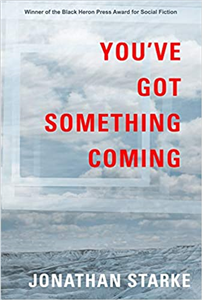 "Trucks’s relationship with his daughter is the emotionally fraught core of this tough and tender novel. Taking punishment both in and out of the ring, Trucks will remind readers of Hemingway’s punch-drunk “The Battler,” as well as the broken dreamers of Leonard Gardner’s Fat City. Starke’s bruising, brooding book is a real heartbreaker.” —Publishers Weekly

“This bittersweet social novel concerns Trucks’s guilt about his failings and Claudia’s eroding innocence. As they cross through South Dakota and into Montana, strangers help them. Poetic vignettes, punctuated by clear images, examine how Trucks’s mistrust of people’s kindness isolates Claudia. When she tells him that she no longer wants him to be her home, it’s unsurprising, but shattering because of her candid weariness.
From gas stations to thrift shops, every place and image is tactile and lean. Graceful lines and cumulative, emotional punches echo Trucks’s ongoing reflection of his boxing past. His frequent monologues are transparent in their sense of unfairness, they convey his coiled frustration. Memories of Claudia’s drug-addicted mother disturb Trucks. His belief that he’s only fit for boxing, and that he just needs a few more rounds, conflict with Claudia’s fears about the “bruisety brains” that result from his matches. When Trucks’s violent outburst at a shelter causes him to flee, leaving boxing as his only avenue for money, it results in an abrupt, desperate act that leaves him disoriented and injured. His and Claudia’s uncertain future underscores the bleakness of poverty. "You’ve Got Something Coming" is a commanding novel that makes a haunting impression as it explores the fallout of a father’s relentless, flawed love.” —Karen Rigby, Foreword Reviews

“This is the most compelling and emotionally bruising novel I’ve ever read. Trucks’ epic love and endurance in suffering for his daughter spark a northern odyssey I will never forget. Fraught with moral battles and offering a deep look at the back roads of our country, every page is stamped with grit and grace. I felt punch-drunk, yet renewed after taking this journey, and the language, as cool and crisp as mountain water, announces the arrival of a marvelous talent.”
—Devin Murphy, author of "The Boat Runner and Tiny Americans"

“The word ‘homeless’ is almost never used in this finely honed 21st century version of Steinbeck’s The Grapes of Wrath, in which a club fighter suitably named Trucks and his daughter Claudia get shunted away from society’s comfort zones and relegated to a road studded with other drifting outcasts." —Ivan G. Goldman, New York Times bestselling author of "The Debtor Class"

“You’ve Got Something Coming is a devastating meditation on love, regret, and perseverance. Part McCarthy and part Carver, Starke’s prose is as lyrical as it is brutal and hits with the intensity of his character’s jabs. You will be hard pressed to find a novel that is simultaneously gut-wrenching and brimming with the beauty of inextinguishable hope. In fact, you would be hard pressed to find a better novel published this year.” _Peter Stenson, bestselling author of "Fiend and Thirty-Seven"

Jonathan Starke is a former bodybuilder, boxer, and nomadic traveler who has ventured through sixty countries. His stories and essays have been published in a number of magazines and literary journals, including The Sun, Missouri Review, Threepenny Review, North American Review, Gettysburg Review, Brevity, Greensboro Review, and others. He is the founder of Palooka, an international literary magazine. You've Got Something Coming is his first novel.