Women’s Agency and Social Change: Assam and Beyond focuses on varied oppression, power relations and ideologies embedded in the complex yet interdependent social, political, economic and legal structures, and women’s subordination therein. British intervention, 1826–1947, by itself did not impact the agency aspect on women directly, but the emergence of new forces and factors sowed the seeds of women’s agency to impact social change, even if minimal. In the post-Independence period, British colonial legacy perpetuated the subordination of women through caste and class hierarchy at several levels, but an undercurrent of a feminist struggle persisted, not merely as a movement but also at individual levels. The book is written with the hope of encouraging future research on women’s experiences in the Northeastern region of India, and elsewhere; hence, a discussion on sources, methods and methodology is included in the conclusion. This book is based on the belief that knowledge production is, in itself, the praxis against oppressive structures and the need to understand the historical processes that slowly transformed women to become catalysts of social transformation. 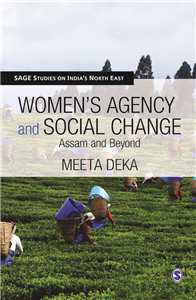