Wolves Match of My Life

A dozen Wolverhampton Wanderers legends come together to tell the stories behind their favourite ever games for the club – enabling Wolves fans of all ages to relive these magic moments through the eyes and emotions of the men who were there, playing their hearts out for the old gold shirt… Bert Williams and Sammy Smyth recall 1949 FA Cup glory, recounting stories of the spirited semi against Manchester United, topped off by Wembley victory over Leicester; Bill Slater opts for the international friendly against Honved that saw Wolves crowned unofficial ‘Champions of the World’ in 1956. John Richards waxes lyrical about his Wolves debut at the Hawthorns, while Derek Parkin selects the 1980 League Cup Final against Forest. Molineux legends Roy Swinbourne, Ron Flowers and Steve Bull also turn in characteristic star performances, winding back the clock to relive treasured memories of the Match of Their Lives for the Wolves. 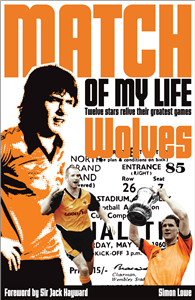 Simon Lowe is a well-known Midlands-based football historian, writer and author, with over 15 published books to his name. He has also co-produced several videos and DVDs about Midlands football clubs including Wolves, West Brom, Stoke City and Coventry City, as well as others featuring personalities such as Billy Wright and Cyrille Regis.