One Hundred Pieces of Gold

From the thousands of matches ever played by Wolverhampton Wanderers, stretching from the foundation of the Football League across more than 120 years to the Premier League era, here are 100 of the club's most glorious, epochal and thrilling games of all! Expertly presented in evocative historical context, and described incident-by-incident in atmospheric detail, Wolves Greatest Games offers a terrace ticket back in time, taking in the club's four victorious FA Cup runs, the floodlit games which helped establish European competition and later League Cup wins. An irresistible cast list of club legends - Billy Wright, John Richards and Jackery Jones, Derek Dougan, Steve Bull and Ron Flowers - springs to life in a thrilling selection of hard-fought derby matches, European highs and triumphant seasons in all four English league divisions. In all, a journey through the highlights of Wolves history which is guaranteed to make any fan's heart swell with pride. 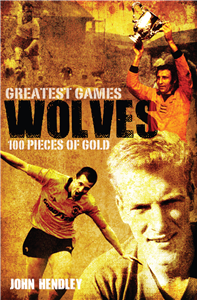 John Hendley is Wolverhampton Wanderers' club historian and programme editor, and the author of the Wolves Miscellany and On This Day. A lifelong Wolves fan, he achieved a long-standing ambition in 1999 by becoming a member of staff at Molineux, his current duties now extending to press work and contributing articles to the official club website.