My Great Uncle, George Clarke Robertson - A Left Winger in the Steel Towns

Wings of Steel tells of Iain Paterson's quest to uncover the story of his great uncle, a football star before World War I with Motherwell, Sheffield Wednesday and Scotland - once described as the best outside-left in Britain. Among the treasured mementoes inherited from his late grandmother was a shoebox full of photographs of family and friends long departed - the most fascinating being those of an unknown young man in vintage football kit sporting a Scottish cap dated 1910. As Iain discovered, his mother's older brother was Motherwell's first international player, the man responsible for Sheffield Wednesday becoming known as the Owls… and the figure at the heart of a mysterious riot following an international match in politically sensitive 1913 Dublin. Wings of Steel aims to set the record straight on many inaccuracies attached to George's story over the years, and to discover where George finally ended his days. 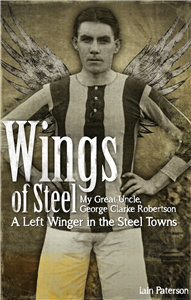 Wings of Steel is the first book by Iain Paterson, a former local government officer who was brought up in the same small Clackmannanshire village as his great uncle. Iain was a major contributor to The Dictionary of Scottish Architects. An enthusiastic amateur genealogist, he has written a number of articles for family history magazines.