Why China did not have a Renaissance – and why that matters

Concepts of historical progress or decline and the idea of a cycle of historical movement have existed in many civilizations. In spite of claims that they be transnational or even universal, periodization schemes invariably reveal specific social and cultural predispositions.
Our dialogue, which brings together a Sinologist and a scholar of early modern History in Europe, considers periodization as a historical phenomenon, studying the case of the “Renaissance.” Understood in the tradition of J. Burckhardt, who referred back to ideas voiced by the humanists of the 14th and 15th centuries, and focusing on the particularities of humanist dialogue which informed the making of the “Renaissance” in Italy, our discussion highlights elements that distinguish it from other movements that have proclaimed themselves as “r/Renaissances,” studying, in particular, the Chinese Renaissance in the early 20th century.
While disagreeing on several fundamental issues, we suggest that interdisciplinary and interregional dialogue is a format useful to addressing some of the more far-reaching questions in global history, e.g. whether and when a periodization scheme such as “Renaissance” can fruitfully be applied to describe non-European experiences. 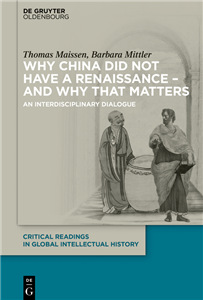 The independent academic publisher De Gruyter can look back at a company history of over 260 years. Today, the De Gruyter group publishes over 1,300 new titles each year in the humanities, social sciences, STM and law, more than 700 subscription based or Open Access journals, and a variety of digital products. The company is headquartered in Berlin, with offices in Basel, Beijing, Boston and Munich. For license requests please contact: rights@degruyter.com

De Gruyter has chosen to review this offer before it proceeds.