As wrestling superstar 'Big Daddy', Shirley Crabtree became a larger-than-life national icon in the 1970s, even if the fights themselves were a bit dodgy. These were the halcyon days of televised wrestling in Britain, an innocent age when men in leotards were still allowed out in public - and surely there was no way the wrestling was fixed? Touching 55 when fame finally arrived, the 'People's Champion' was never allowed to be beaten, which angered some; but Daddy put most bums on seats. At the height of his popularity, he appeared in comics and on records; his 1981 Wembley contest against Giant Haystacks attracted a TV audience of 18 million. However, it wasn't all glittery capes and national anthems: when the lights went down, Shirley's life was tinged with tragedy. Only those closest to Big Daddy saw him struggle on in the ring after a stroke to the age of 63. 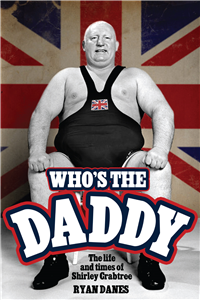 Ryan Danes was born in Plymouth in 1975, just as Big Daddy was bursting on to the scene and out of his leotard, and he considers the man a childhood hero. Since then Ryan has had various publishers, BAFTA award-winning directors and authors in head-locks and wedgies as he's tried to sell his work, until somebody finally submitted to his demands.