Who Says Football Doesn't Do Fairytales?

How Burnley Defied the Odds to Join the Elite

Once upon a time, on 21 April 2014, something extraordinary happened, as unfashionable Burnley sealed their promotion to the Premier League. It was the improbable culmination to one of the most magical, inspirational and unpredictable stories in the modern game. This is English football's Moneyball. At the start of the season, the Lancashire club were among the favourites for relegation from the Championship, with a tiny budget, threadbare squad and a manager plucked from the supposed scrapheap. Few outside of Turf Moor gave them a hope: Burnley were there to make up the numbers alongside big-budget, high-spending rivals. Even before they sold their star striker in the opening month of the campaign... Who Says Football Doesn't Do Fairytales? tells the story of a season which Dyche called a 'marker for history' and gives an insight into how a sporting David can still overcome economic strictures to beat the Goliaths. 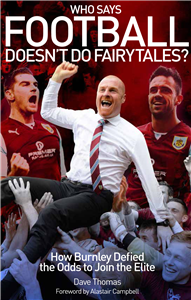 Dave Thomas is the author of 12 previous books on his beloved Burnley FC which, along with his charity dinners, have raised thousands of pounds for the club. He has also written for the Times Educational Supplement, and had several short stories published about his (sometimes) hilarious time as a head teacher in a small village school near Leeds.