Who Can Afford to Improvise?

James Baldwin and Black Music, the Lyric and the Listeners

More than a quarter-century after his death, James Baldwin remains an unparalleled figure in American literature and African American cultural politics. In Who Can Afford to Improvise? Ed Pavlić offers an unconventional, lyrical, and accessible meditation on the life, writings, and legacy of James Baldwin and their relationship to the lyric tradition in black music, from gospel and blues to jazz and R&B. Based on unprecedented access to private correspondence and unpublished manuscripts and attuned to a musically inclined poet’s skill in close listening, Who Can Afford to Improvise? frames a new narrative of James Baldwin’s work and life. The route retraces the full arc of Baldwin’s passage across the pages and stages of his career according to his constant interactions with black musical styles, recordings, and musicians. Who Can Afford to Improvise? is presented in three books—or movements; the first listens to Baldwin, in the initial months of his most intense visibility in May 1963 and the publication of The Fire Next Time. It introduces the key terms of his lyrical aesthetic and identifies the shifting contours of Baldwin’s career from his early work as a reviewer for left-leaning journals in the 1940s to his last published and unpublished works from the mid-1980s. Book II listens with Baldwin and ruminates on the recorded performances of Billie Holiday and Dinah Washington, singers whose messages and methods were closely related to his developing worldview. It concludes with the first detailed account of “The Hallelujah Chorus,” a performance from July 1, 1973, in which Baldwin shared the stage at Carnegie Hall with Ray Charles. Finally, in Book III, Pavlić reverses our musically inflected reconsideration of Baldwin’s voice, projecting it into the contemporary moment and reading its impact on everything from the music of Amy Winehouse, to the street performances of Turf Feinz, and the fire of racial oppression and militarization against black Americans in the twenty-first century. Always with an ear close to the music, and avoiding the safe box of celebration, Who Can Afford to Improvise? enables a new kind of “lyrical travel” with the instructive clarity and the open-ended mystery Baldwin’s work invokes into the world. 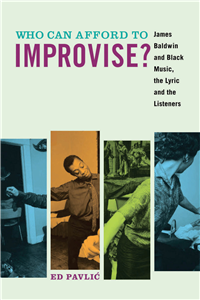 “Pavlić offers the most extensive engagement to date with Baldwin’s lifelong love affair with black music, but he also provides the most sustained and compelling account of how Baldwin’s work speaks (or sings) to our present global condition.”—Emily Lordi, author of Black Resonance: Iconic Women Singers and African American Literature

“A brilliant and original study of Baldwin as the ultimate bluesman.” —David Ritz, author of Respect: The Life of Aretha Franklin

Ed Pavlić is Professor of English and Creative Writing at the University of Georgia.