When I Sing The Mountain Dances

A novel of the mountain in which humans, the animal kingdom, and the vegetal kingdom take the ﬂoor to tell an incredibly beautiful story of love, friendship, and redemption.

Domènec, a peasant and a poet, and Sió, his wife and a beautiful and determined girl, move to Matavaques, his country house in the mountains close to the border with France. During one of their usual walks, Domènec dies hit by lightning during a storm. Sió must carry on running the farm and with the education of their children Mia and Hilari, who are still very young. The local legends and the landscape of the Pyrenees shape the imagination and sensibility of these children who have a wonderful friendship with a neighbor their age: the strong and mysterious Jaume. He and Mia enter into a relationship. When they are just 20, Hilari and Jaume go hunting and Jaume accidentally kills Hilari. He never returns to the village when he gets out of prison. Time passes, Mia is a shy woman who lives only with the company of her dog Lluna. One night when he’s had too much to drink at the bar where he works as a cook, Jaume runs over a deer with his car. When he realizes that the animal is still alive, he feels the impulse to go back to Matavaques to ﬁnally talk to Mia.

With an overﬂowing and contagious energy, Solà has written a tight novel with beautiful prose full of textures and a daring game of points of view.

«Solà's prose seduces us with her exultant ability to write about memory, knowledge, and life in a world of its own with enthusiasm and joy» (Ponç Puigdevall, El País). 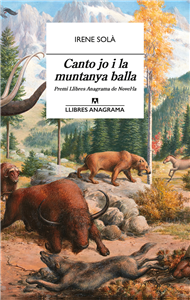 Anagrama, founded in 1969, has published around 4.000 titles. We are focused on looking for new voices, betting for the possible classics of the future and exploring the most significant political, moral and cultural debates of our time.