What Did Jesus Drive: Crisis PR in Cars, Computers and Christianity

Isn’t it time that we are told the insider TRUTH regarding the intentional and unintentional cover-ups made by the big boys in “Detroit.” An industry, the Auto Industry, driven by profits-over-principle according to many of its critics. Be prepared to buckle-up and enjoy this ride! This book is the first tell it like it is, of its kind!

From Richard Nixon to Bill Clinton to Lance Armstrong to the IRS to Brian Williams to Bill Cosby to Tiger Woods and the NFL; why is it so painfully difficult?

Vines cautions the reader up-front: “Relax, this is not a book about Jesus. However, he does appear in two chapters: first as a Hispanic grandfather from Waterford, Michigan, and later as the real Prince of Peace. No, this is a book about my life in the public relations blast furnace in the automotive industry; a quickly-derailed attempt to help a friend rebuild Detroit’s tattered image, thwarted by the sex, lies and corruption of former Mayor Kwame Kilpatrick; and, finally, trying to avoid another crisis with the number one selling book of all time. No, not Harry Potter; the Bible.”

The crises Vines helped navigate through made headlines the world over: Jeep vehicles accused of deadly sudden unintended acceleration, Nissan’s near-death experience until it regained its MOJO, the Ford/Firestone tire mega-debacle, a jihad against SUVs by the “What Would Jesus Drive?” nuts, Detroit Mayor Kilpatrick’s drive to prison and finally avoiding a boycott of the most popular Bible in the world by evangelical Christian leaders. In his final chapter, titled “Government Motors on Fire”, Vines tackles the fake Chevy Volt fire crisis and General Motors’ 2014 nightmare with its faulty ignition switches that led to at least 24 deaths – and counting, and may lead to criminal indictments.

Vines shares lessons learned and mistakes made. He notes that if he can impart anything in this book, it is the guiding principles he believes useful for any organization (not just the auto industry) or individual to avoid, mitigate or survive the inevitable crisis. As he puts it: “If you think you are immune to a crisis, you’ve already failed an overarching guiding principle.” 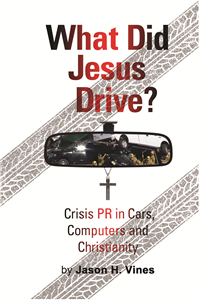 This book has already been endorsed by Lee Iacocca, Autoweek Publisher Dutch Mandel, Joe Trippi-Democratic Campaign and Media Consultant, and Dr. Ricardo Martinez, MD, FACEP, former Administrator of the National Highway Safety Administration (NHTSA) to list a few! Autoweek states that this book is a “Must-Read.”

This book has already been endorsed by Lee Iacocca, Autoweek Publisher Dutch Mandel, Joe Trippi-Democratic Campaign and Media Consultant, and Dr. Ricardo Martinez, MD, FACEP, former Administrator of the National Highway Safety Administration (NHTSA) to list a few! Autoweek states that this book is a “Must-Read.”

Jason Vines, one of the most out-spoken and brutally frank Public Relations chiefs in the history of the Automobile Industry. Jason Vines takes readers on a graphic, sometimes sad and often hilarious behind-the-scenes romp through some of the most publicized and studied crises in recent history.