West Ham United On This Day revisits all the most magical and memorable moments from the club’s distinguished past, mixing in a maelstrom of quirky anecdotes and legendary characters to produce an irresistibly dippable diary of claret-and-blue history – with an entry for every day of the year. From the club’s Victorian formation through to the Premier League era, the Upton Park faithful have witnessed championships and and relegations, hard-fought derbies, Cup triumphs and unforgettable European nights – all featured here. All-time greats including Bobby Moore and Trevor Brooking, Paolo di Canio, Tony Cottee and Billy Bonds all loom larger than life. Revisit 19th May 1965, when West Ham beat TSV Munich 2-0 in the European Cup Winners’ Cup Final. 3rd May 1975, when Alan Taylor won the ‘Cockney Cup Final’ against Fulham, starring Bobby Moore. Or 4th August 1963: The Iron win the American Soccer League, despite an hour-long pitch invasion! 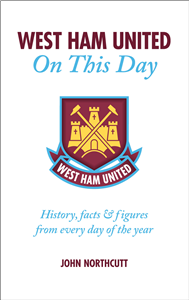