West Bromwich Albion Cult Heroes is devoted to those players who, over the years, have won a special place in the hearts of the Hawthorns faithful - not necessarily the greatest footballers, but a unique brotherhood of mavericks and loyal stalwarts, local lads and big signings. The cast list alone is enough to stir up the memories and tug at the heartstrings of any Albion fan - Astle, Pennington and Regis, Kevan, Richardson and Taylor - recalling how these charismatic personalities used to ignite passion on the terraces. Find out which Baggies icon used to accept cigarettes from the crowd during the game, and who inadvertently stole his fans' beer. Who was refused entry on his first day at Albion, and which Scottish international winger played in a bank robber's mask! Discover and delight in the magical qualities of these 21 mere mortals elevated to cult status in the Black Country. 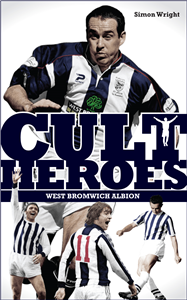 Simon Wright is the author of West Brom's Greatest Games and Flight of the Throstles, and for many years was editor of the Grorty Dick fanzine which followed the fortunes of the club. A veteran of more than 1700 West Bromwich Albion matches spread over four decades, he is now one of the few remaining public sector workers.