Two elderly spinster sisters––Florence and Lorraine––have lived together ever since the death of their wealthy father, living on generous stipends provided in his will that continue until one of them marries––at which time that sister is cut off financially.  The sisters’ family is shaken up when Florence invites them to her wedding.   The morning after the wedding, Florence is found dead in her bed.  Was it an asthma attack as her new husband and the police believe or did someone enter her room in the middle of the night and suffocate the old woman with a pillow?  Local amateur sleuth Rabbi Jacob Kappelmacher is brought in to investigate the suspicious death.  He soon discovers that all of the sisters’ relatives stayed overnight following the wedding and could have strangled the old woman in her sleep.  So could have the bridegroom.  But who did it?  And why?  With no money and no motive, why would anyone kill the old woman? Rabbi Kappelmacher begins his investigation by interviewing all of the interested parties, intent on figuring out the convoluted and devious crime––and the sinister culprit behind it. 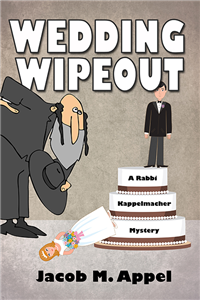 Jacob has taught most recently at BrownUniversity in Providence, Rhode Island, and at the Gotham Writers’ Workshop in New York City.  He was honored with Brown’s Undergraduate Council of Students Award for Excellence in Teaching in 2003.   He formerly held academic appointments at PaceUniversity, HunterCollege, WilliamPatersonUniversity, ManhattanCollege, ColumbiaUniversity and New YorkUniversity.  Jacob holds a B.A. and an M.A. from Brown,  an M.S. in bioethics from the Alden March Bioethics Institute of Albany Medical College, an M.A. and an M.Phil. from Columbia, an M.D. from ColumbiaUniversity's College of Physicians and Surgeons, an M.F.A. from N.Y.U. and a J.D. from HarvardLawSchool.  He also publishes in the field of bioethics and contributes regularly to such publications as the Journal of Clinical Ethics, the Journal of Law, Medicine & Ethics, the Hastings Center Report and the Bulletin of the History of Medicine.  His essays have appeared in The New York Times, The Chicago Tribune, Detroit Free Press, Orlando Sentinel, The Providence Journal and many regional newspapers.