Watford FC On This Day

Watford FC On This Day revisits all the most magical and memorable moments from the club’s rollercoaster past, mixing in a maelstrom of quirky anecdotes and legendary characters to produce an irresistibly dippable Hornets diary – with an entry for every day of the year. From the club’s formation in 1881 through to the Premier League era, the Vicarage Road faithful have witnessed promotions and relegations, breathtaking Cup runs and title tilts – all featured here. Timeless greats such as John Barnes, Luther Blissett and Tony Coton, John McCelland, Ross Jenkins and Duncan Welbourne all loom larger than life. Revisit 27 August 1927, Watford’s first game in blue after changing from black-and-white stripes. 15th April 1969: victory over Plymouth gained the club’s first promotion to the second tier. Or 14th May 1983, when Watford beat Division One champions Liverpool in the season’s final game to claim runners-up spot! 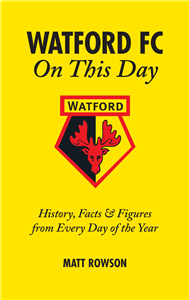 Watford FC On This Day is the first book by Matt Rowson, who was a contributor to the web-based fanzine Blind, Stupid and Desperate from 1997. Matt went on to co-edit the website before its sad demise in 2006, since which time he has continued to make contributions to the associated BHaPPY blog.