Wales On This Day

Wales On This Day revisits all the most magical and memorable moments from the nation’s footballing past, mixing in a maelstrom of quirky anecdotes and legendary characters to produce an irresistibly dippable Dragons diary – with an entry for every day of the year. From that day in 1876 when Wales visited Scotland to become the third international football nation, right through to the Millennium Stadium era, the red-and-white faithful have witnessed a host of successes in the now-defunct British Championship, plus famous one-off victories, heart-rending near misses and valiant defeats (plus a few less defiant losses) at the Racecourse Ground. Timeless greats such as Ian Rush, Billy Meredith and John Charles, Fred Keenor, Ryan Giggs and Gareth Bale all loom larger than life alongside lesser-known heroes and one-game wonders in a history capped by quarter-final appearances in both the World Cup and the European Championships. 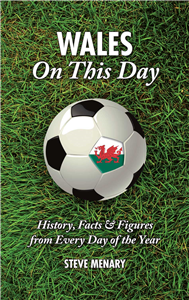 Steve Menary is the author of Outcasts! The Lands That FIFA Forgot and GB United? British Olympic Football and the End of the Amateur Dream. Steve is a regular contributor to World Soccer and has written for When Saturday Comes, FourFourTwo, Backpass, Sport & Society and All Sports magazine of India.