The Biography of Trevor Bailey

Three times an Ashes winner, Trevor Bailey is regarded next to Ian Botham as England’s premier all-rounder since the Second World War. He was a schoolboy prodigy at Dulwich College and won cricket and soccer blues at Cambridge University and an FA Amateur Cup winners’ medal with Walthamstow in 1951-2. At the heart of the story is the fighting spirit of a loyalist who served England – and his home county, Essex – so well in a crisis. He was at his greatest when tensions ran high, especially in one of the most celebrated of rearguard actions against Australia at Lord’s in 1953. Bailey played in 61 Tests in which he became then only the second Englishman after Wilfred Rhodes to score 2,000 runs and take 100 wickets. His cricket acumen in retirement brought him to the attention of another, listening public as a broadcaster on the BBC’s Test Match Special programme. 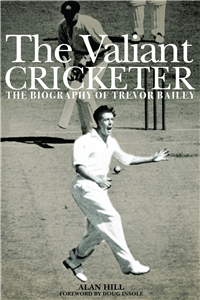 Journalist and writer Alan Hill has twice won the prestigious Cricket Society Literary Award for his biographies of fellow Yorkshiremen, Hedley Verity and Herbert Sutcliffe. He has also been acclaimed for his portraits of Surrey legends – Peter May, Jim Laker, Tony Lock and the Bedser twins. Alan is a senior member of the Cricket Writers’ Club.