At the start of 1986 Raith Rovers were a club in crisis. Languishing near the bottom of Scottish football, they were managerless and playing before crowds of just a few hundred. Yet less than a decade on the club would defy the odds to win their first ever national trophy, the Scottish League Cup, defeating Glasgow giants Celtic and qualifying for Europe in one of Scottish football's most dramatic cup finals. Unthinkable tells the inside story of that remarkable journey and thrilling final from the perspective of the management and players of the Kirkcaldy club. Drawing on illuminating interviews with all the main characters, it reveals exactly what the players were thinking each step of the way and what drove them on to achieve their unparalleled success. The true story of underdogs battling against the odds to take their place in the history of the Scottish game. 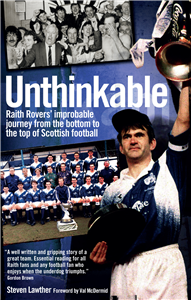 PR company director Steven Lawther has written widely on football in magazines, fanzines and the Raith Rovers programme. A fan of the Kirkcaldy club for over 35 years, he sits on the board of the Raith Supporters Trust, and has worked with several football clubs and Supporters Direct Scotland to help research fans' opinions on key issues.