Travels in the White Man's Grave

At the beginning of the 1950s, the interior of West and Central Africa was still known to most of the outside world as "The White Man's Grave", and there were still large parts where its forests were primeval. These forests inhabited the minds of most Westerners as places of foreboding.;To Donald MacIntosh - a 23-year-old Gaelic-speaking Scottish forester - however, it was a dream come true when he found himself posted to the humidity of the fabled lands. During the next 30 years he was to wander through some of the most remote areas of West Africa, stretching along the shores of the Gulf of Guinea from Liberia to Gabon, where he operated as a surveyor, tree prospector and forest botanist. There he listened to the tales of ancient Africa from the lips of hunters, fishermen, chiefs and witch doctors from a vast variety of tribes in myriad encampments, drinking palm wine with them, attending their village dances and ceremonies under the tropic moon, or often simply lying on his own in the village clearing, listening to the tattoo of distant drums sounding through the columnar mahoganies.;MacIntosh had many adventures with the creatures of the forest, from leopards to homicidal buffalo, and from vipers to spitting cobras. Each tale is recounted in this volume in an odyssey which he describes as "fun and adventure all the way". Despite its reputation, MacIntosh was rarely ill in the "White Man's Grave" and he encountered a host of characters along the way - "Old Man Africa", "Magic Sperm", "Famous Sixpence" and "Pisspot" among them. His story is of an Africa which no longer exists, providing a glimpse into the region's vanished past. 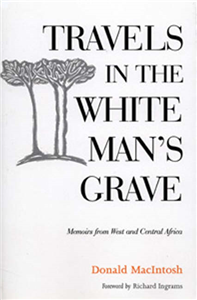